Hojo hojo, it's Pasi writing. What a great morning to wake up! Had some breakfast at hotel's restaurant and went for a walk to a river nearby. Now we noticed a huge waterfall in the distance falling from the middle of the mountain maybe few kilometres away. Anyway we decided with Lasse that we will deffinitely go to see that waterfall Boka and so we took a hiking path up to the mountain next to our hotel. Walked for maybe 45 mins up the mountain sweaty as hell...at least 3 times almost given up that maybe we just go back to hotel but still continueing to the edge of the mountain as far as you could go ...the actual waterfall was still maybe 300 meters away but now we could see all of the 106 meters long waterfall and it just looked amazing! 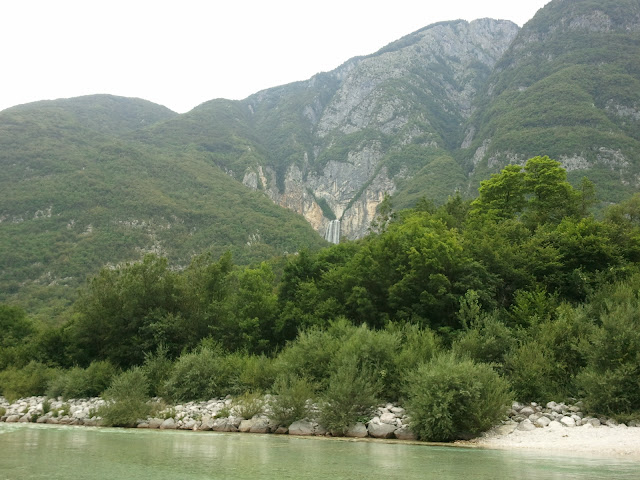 The river nearby our hotel and the waterfall Boka on the background. 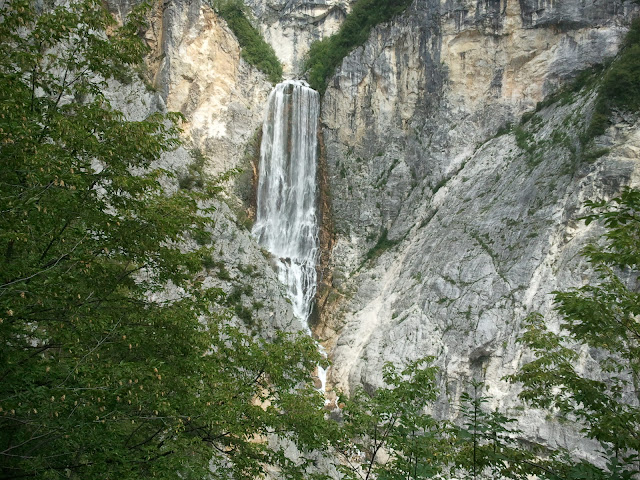 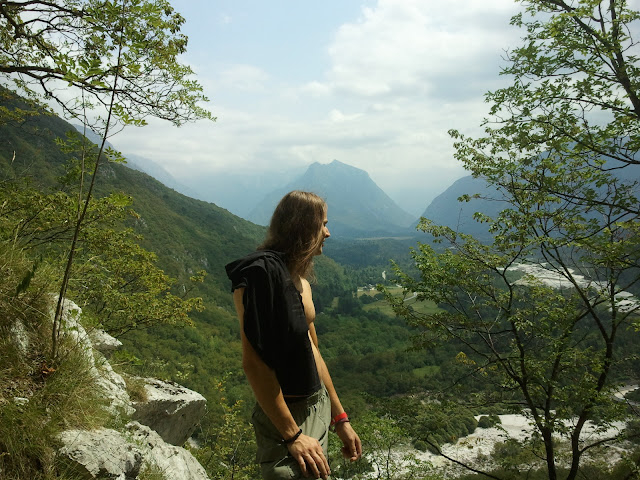 Getting down the waterfall hiking path... 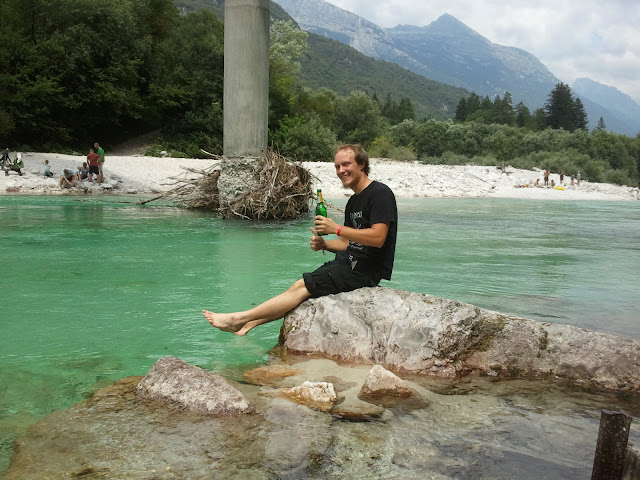 Joonas having cold Lasko by the river.

Well back to hotel and soon we ordered a pick up to the festival.. We arrived to the festival area around 15 o'clock and checked out the mainstage...looks nice! We carried our stuff to the dressing room where we found a fridge full of nice surprises... :D Another nice surprise was when Kai from Wintersun came to say hi to us in our backstage...was so nice seeing him again and later Jari and Teemu also! I think Kai had drink something, hehee :D

Showtime - ready to rumble! Okay the intro is on and we rush on to the stage for the first song Warrior's Heart... öhm Emppu's string got broken from the first note and nope we did not have a spare guitar for that show... Well Emppu manages to change his string pretty quickly but it's already the second song when he comes back! :D What a nice start for a show! Still the weather is so great and it's nice to play for the great audience. Right after Tales of the End we play an old instrumental song  full of arpeggios and solos! :D That was nice!

Soon it gets to the point what we all have been waiting for as Michele speaks we gonna play next our new track Ghost in Me which will be released on the 2nd album! The song starts and the audience seem to mosh with it harder than earlier...looks like it's working and hell yea it's great to play it and everything feels great with that song! Then we play 2 last songs Scion of Stars and Shadows and Rain and we're about to faint from the hot weather but all great...nice show...not the best but good one!


So about fridge full of nice surprises ...it's time to uncork them and have fun with the guys of Wintersun, with Rock the Nation guys and a lot of other people!

A nice little hangover I'm telling you...well that happens. Joonas calls me to wake up and join him and Emil to the hotel's terrace so me and Lasse joins them for few Laskos but not really tasting at that moment.. We decide to go swimming in the river that is something like +13 warm water so pretty chilly..but looks so tempting  with the water's turquoise colour and with lots of trouts swimming there...what a paradise! So here we are by the river ready to go there...finally me and Joonas manage to dive there so mission accomplished..see the videos below! 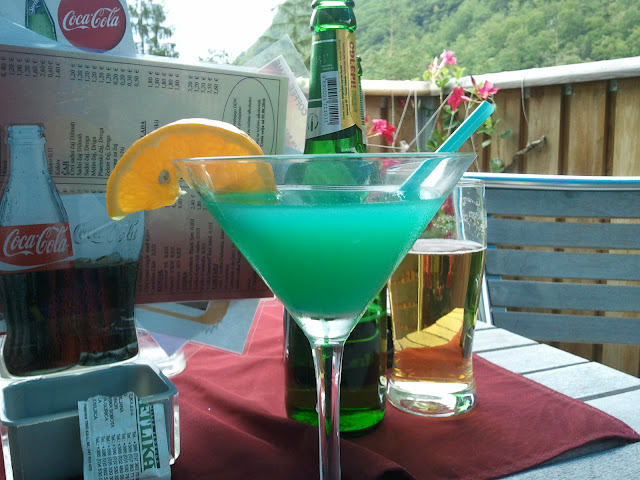 Soca cocktail or something like that from the hotel ....the colour is pretty much like the river. :D


Okay time to pack the bags and head back to the festival area from where we will be taken to the airport of Venice at 1.30 at night. First thing we see when we arrive is Chris from Alestorm walking with "stereo beers" in his hands and we rush to say to the guy! Then inside the vip area we find all the other dudes of Malestorm and with their tour manager Stijn and it's great to see him again as well after the tour we did with Sabaton and Alestorm in the previous autumn. Of course Wintersun guys are there as well to get some beer in their bellies...so party on! We see few bands like Blind Guardian and In Extremo that night and also greet to our Power of Metal tour mates from Mercenary who are keeping the metal party going at the main stage after the headliner Blind Guardian have finished. We talk something more with our record label's guys and finally end up to the beach bar with Winterun guys. I think Vili and Lasse went to see for few songs from Alestorm as we others were at the beach. Time ran fast and so it came to say goodbyes again as our festival shuttle was about to take off to the airport.

Let the terrible and long travel back home begin!

Hey next weekend it's Tuska festival in Helsinki, Finland ...me, Emil and Joonas should go there to greet the guys from Hell with whom we did the Metalfest tour together with Wintersun...who will be playing at Tuska as well on friday! So if anyone's coming ...come to say hi! Maybe on Saturday should check out Merging Flare at Tuska's after party in Dom. We will see...

Okay take care everyone and more news to follow in the coming days/weeks!

Posted by Thaurorod at 6:34 PM No comments:

So it is time for hell over paradise as Metalcamp 2011 have started and THAUROROD plays on Metalcamp's mainstage on Thursday 14th July at 18.35!

It will be a special show us in many ways... first of all it's the last scheduled show before we start heavily working on the 2nd album. Besides that we will play live one brand new song "Ghost in Me" from the upcoming 2nd album in Metalcamp for the first time ever! And of course it's just great to be part of this amazing festival!


Had our last rehearsels before the show today and tomorrow morning we are off to Metalcamp! Stay tuned for this blog for more stuff, pics, etc...

Oh and btw we have our signing session in Metalcamp right after the show at 20.30 - come there to greet the whole band! Would be nice to hear your opinion on the show and especially on the new song!!!

Hey...what a great mid summer fest it was! Was so great meeting with a lot of friends and have fun...the weather was great on Friday and Saturday except during the time we were soundchecking and and loading out! :D The rain actually stopped while cheerful power metal was on, hehe :D Anyway the show was awesome as was crazy audience of Nummirock as well! 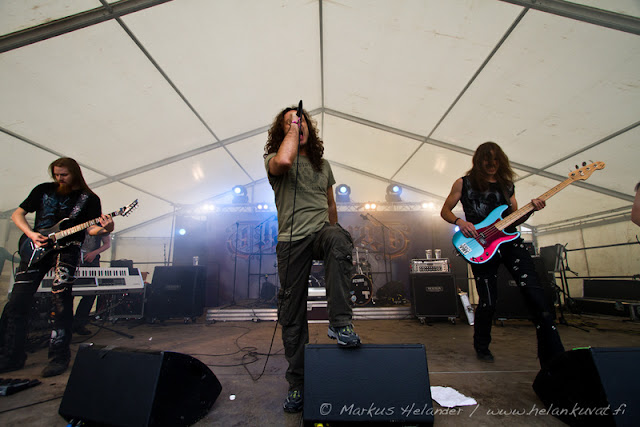 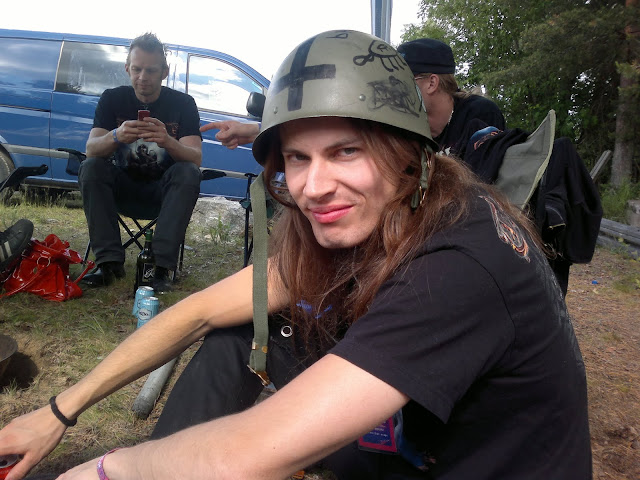 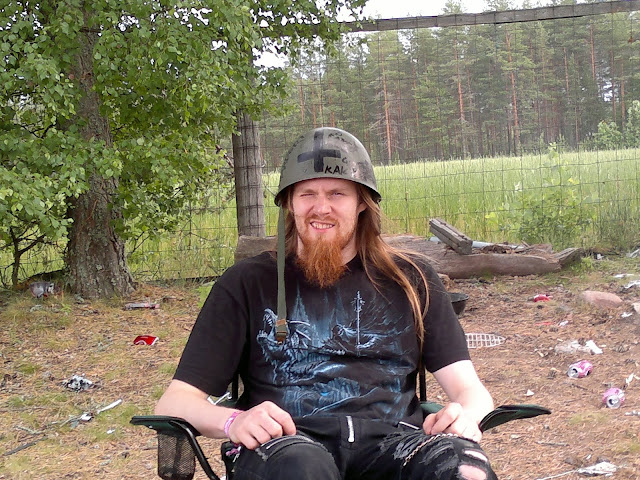 Actually we drove to Nummirock already on Thursday evening or more like we arrived there on Friday morning at 3.30A.M. or something. We parked the car in the camp with our friends from Hyvinkää and put on an awesome mid-summer camp with beer, grilling, palinka, jallu, mölkky and good old friends! The weekend just went by too fast...well next pitstop: METALCAMP 2011...see you there my friends!!!

Oh and by the way we just might play for the first time ever 1 new track from the upcoming 2nd album on Metalcamp so be prepared!!! 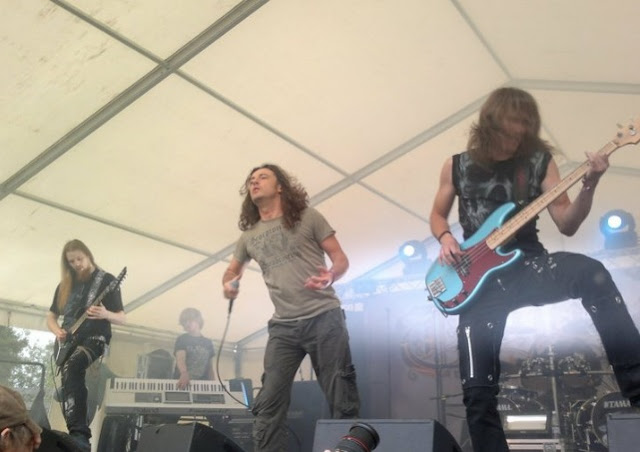 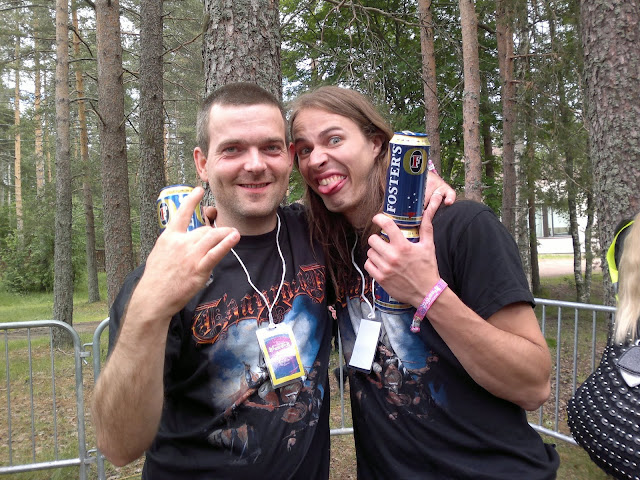 Having few kangaroo beers with a friend of mine at the drinking area of Inferno stage! 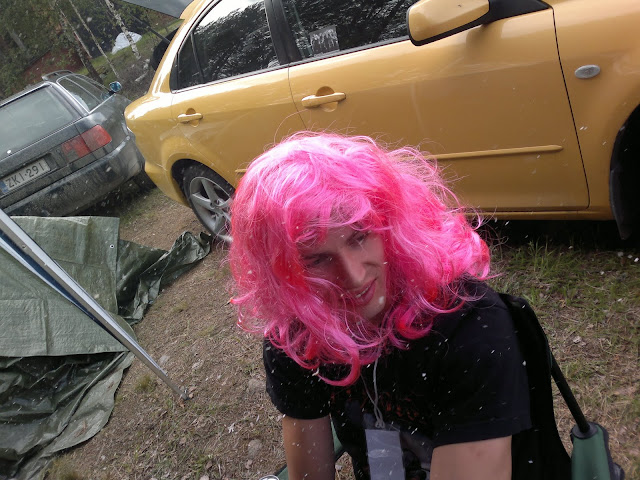 ....and finally I decided to colour my hair with a bit more masculine colour! :D