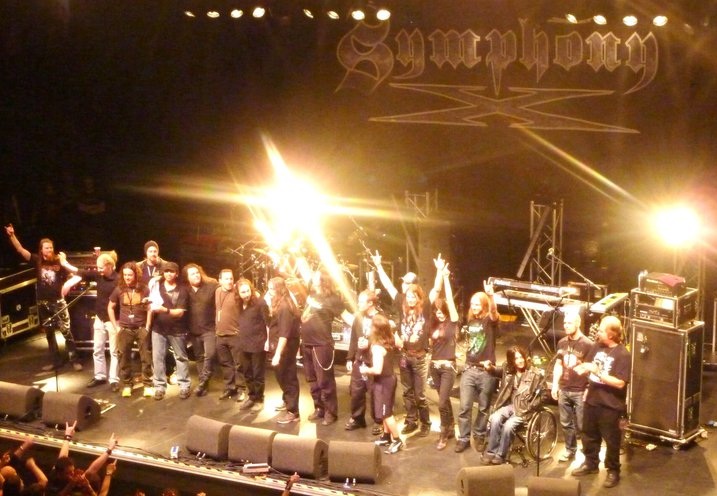 So the POWER OF METAL tour 2011 have come to an end but it sure was fun!

Anyway a show in Tilburg was a perfect ending for this outstanding tour.. we played deffinitely one of the best shows of the tour there and the audience was amazing as the audience in The Netherlands always!

As some bands tend to do some little pranks for each others on the last show of the tour we decided also to come out with some kind of prank for a headliner Symphony X. We happened to find from some cheap market in Frankfurt ...red devil thongs for men... :D So me, Lasse and Joonas bought those! Then we decided to wait until Symphony X ballad song Paradise Lost was on in 013, Tilburg and surprise the guys with rushing onto the stage wearing nothing but those thongs...heh was kinda fun..I mean not wearing them but the rest :D:D:D


We also met 3 guys from ALESTORM there at the venue as they had come to see us there 'cause they live in Tilburg. So we had fun with them and POM folks...finally after several beers we said goodbyes for everyone and the bus took us to the Düsseldorf airport for the flight back home..So here we are in Finland again..it's getting spring here too but damn I did not miss the snow 'cause the snow haven't gone anywhere yet..well soon it must as the spring and summer comes to the picture with some outdoor festivals like Metalfests(Germany, Austria, Switzerland), Nummirock, Metalcamp...So see you there!

Getting very close to the end folks! So here we are in Tilburg at a venue called 013 and in 4 hours we will play our last show on Power of Metal tour 2011! Kind of sad now as it ends but hell yea it has been one great experience and have been awesome to get to know all these dudes we tour with! Thank you SYMPHONY X, NEVERMORE, PSYCHOTIC WALTZ, MERCENARY and the tour crew. Thank you all the CRAZY AUDIENCES! Thank you everyone!

Yesterday we played a show at Music Hall, Geiselwind! Had a crazy audience and played a great show! Damn it was cold weather in Geiselwind...well I guess it's good to get used to it as we are back to Finland tomorrow!

Okay then...I'll drop a line later on after our show in Tilburg and after getting back to Finland and hopefully there will be a few more pics in the blog!

Pasi
Posted by Thaurorod at 12:32 PM No comments:

Greetings from a stranger?

Some of you guys maybe have been wondering where the fuck is Emmi? Well... How the hell I should know? But I know that I'm kinda replacing her and doing this tour with these badass guys. Our singer have been introducing me as Mika Häkkinen but suprise suprise.. I'm not a fucking Häkkinen. My name's Mika Karjalainen and I play in a band called Whispered. You all should go to check it out RIGHT NOW: www.whisperedband.com

What can I tell you about the tour? It has been a pleasure to be part of this. Venues have been great and the audiences as well. Not to mention about the other bands and crew! These Thaurorod guys can really play I can tell you that and are fun to hang out with. Like one dude here said "these Thaurorod dudes are fucking vikings man!! They out drink us all and still rock every night". So.. it's been great!

Right now we're in Amsterdam. We had our show few hours ago and it was great even though somebody threw few bananas to the stage but what the hell (http://www.youtube.com/watch?v=wDnJ_AnVxZE part 2:33)?!?! We threw them back and rocked the guys cock off! Anyway Thaurorod had some banana humour in the end of their music video "Warrior's Heart" so that was kinda fun to have a few bananas onto stage. Very nice suprise also waited us in the morning when we came here... and now I'm not talking about when Emppu got lost in the city and missed the soundcheck... But there was a piano in the catering room! So what about a  little bar piano music for the breakfast??? Hell yeah!

Now I think it's time to go explore the city! See ya tomorrow in Geiselwind!

Oh shit it was the best audience ever in Frankfurt yesterday! Thank you so much! Now in Hamburg, Markthalle waiting for soundchecking... See you at 18.45 hamburgers!!!

Was great to play in Hungaria for the first time and I think we did pretty damn good show. The most important thing however is that audience liked it and we had some great time on stage! Hope to be there soon again!

From Budapest to Münich to spend a nice relaxing day off... yea right..hell no! Our bus got broken somewhere before Salzburg and so the bus needed to be taken to bus service place where they were able to fix the problem what ever it was! I think we spent few hours at the repair station and most of the guys just laid in their bunks while that..well surely also 'cause some of the guys made a new record in  drinking the longest as the "last man standing" went to sleep around 9.30 in the previous morning...what? Thaurorod guys? oh yea!! Anyway we drove a test drive and everything was fine with the bus..then back to road again and arrived to Münich at 18.30 in the evening. Everybody rushed into the city to get something to eat 'cause people were fuckin starving after such long time trapped in the bus where of course was nothing to eat. So I had a nice barbacue mix plate in some nice steak restaurant. Then we went to say hi to Joonas and Lasse to an Irish pub but it was so fucking packed cause there was a soccer game Bayern München - Inter Milan just about to start.  So me and Mika didn't stay for a beer but went for a little walk and then back to bus...a strange day ..a day totally OFF!

Arrived to Frankfurt, Batschkapp had some breakfest, and loaded everything into the venue. Now some sightseeing before the soundcheck! See you guys!

Was great show yesterday at Komma, Wörgl! In the beginning not many people there but it got better and better till the end of the show. We played at 18.10 even though the posters said starting from 19.00 so don't know why it was changed. Anyway was probably the best show so far and audience liked it and damn it was fun on stage!

Arrived to Budapest this morning and it must be the warmest day on tour so far...don't know the temperature but I'm wearing a t-shirt and still it's hot! We took a little walk to Heroes' Square which is not too far from the venue. Would have been nice to walk all the way to the river but unfortunately not enough time before the soundcheck. 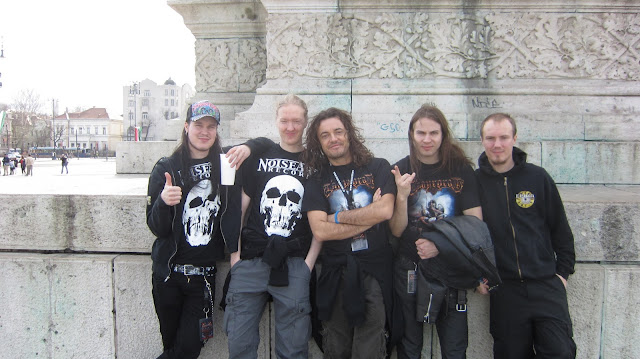 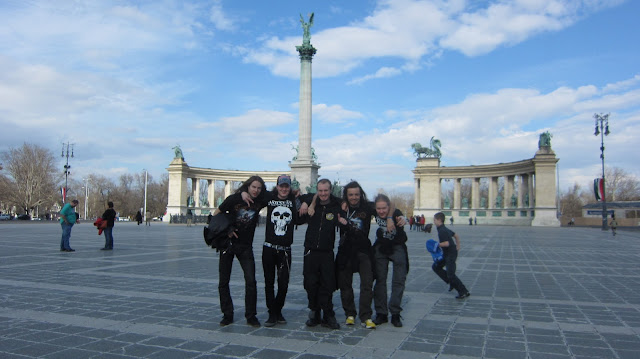 From the Heroes' Square

Venue is on the pest side of the river and it is great and big(Petoefi Hall) capacity of 2500 people... lets hope there will be a lot of people!!! We had great stagesounds in soundcheck so less than two hours till rocking the hell out of Petoefi Hall!!! See you soon!

Greetings from Wörgl! This must be the most beautiful city I've ever seen! The alps and everything looks so epic that it makes me wanna grab my bastard sword and go slain some dragons! Man gotta work on his swords skill you know?

Anyway will be nice to play here..the venue looks great as well! So see you soon..we'll be on stage at 18.10 ...if Joonas makes his escape from the dragon's den in time. :D 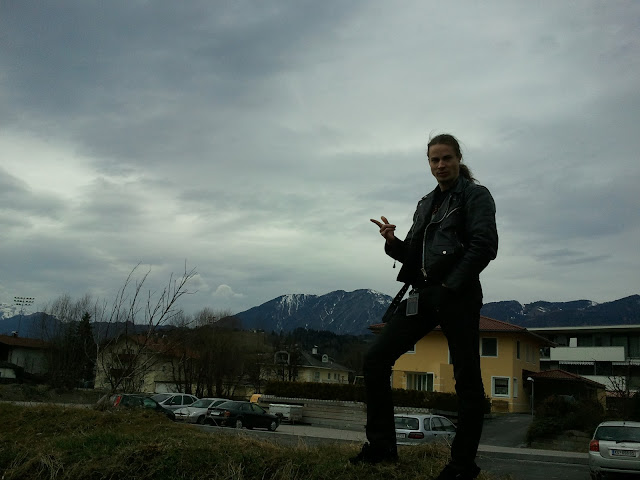 Just minutes before the dragon hunt.

Pasi & Mika
Posted by Thaurorod at 6:06 PM No comments:

Damn it was fun yesterday at Münich..great audience, great after party! Was nice to meet few guys from Rock the Nation/Noise Art as well who were there to see the bands. 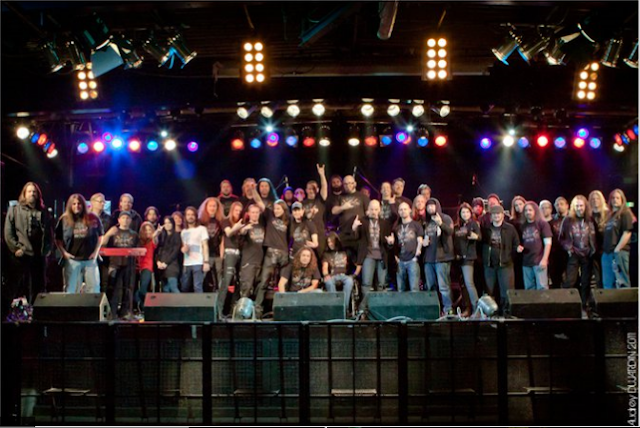 Power of Metal 2011 - group picture with all the bands and crew people.


Now at the huge and awesome venue Gasometer in Vienna, big stage and all, will be cool!

See you there Wieners!

Tonight playing in Munich, Backstage! Come here with us to rock this place!!! Thaurorod on stage at 18.45! 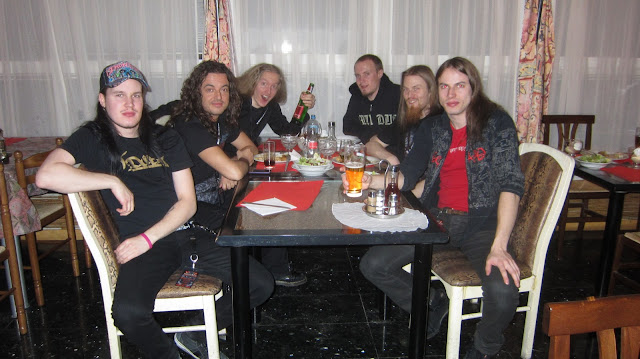 Having dinner in Ljubljana |,,/
Posted by Thaurorod at 4:25 PM No comments:

Day off in Münich and then to Slovenia

Öhh, feeling quite sick with runny nose and sore throat etc.. think quite many people are more or less sick on this tour but it's okay and normal I guess...

So yesterday we were in Munich and guess what? ...we found an another irish bar where we spent few hours listening to an irish band and drinking some cidre and beer... had fun! Luckily I'm not having an hangover at oll but rest of the guys besides Michele haven't even woken up yet so I guess they feel a bit more hangoverish.. :D 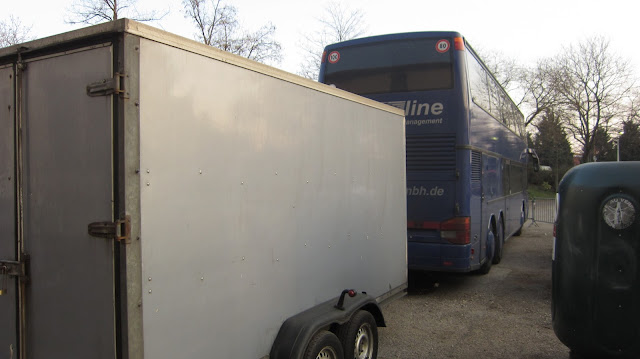 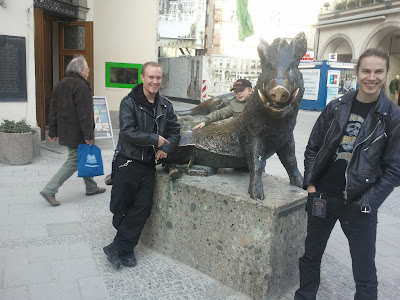 Pretty weird looking triangle shaped stage here but it looks okay! So I'll go have a look at the guys if they are still alive and...what the hell! Rock on! See u in Ljubljana, Cvetlicarna tonight!!!

Hi everybody!
This is the first time I write on this blog!!!!!!!
I had the chance to see many friends over the last 3 gigs.... As you know, Italy is my country!
Florence and Milan... Probably the best audience of the whole tour!
Can't wait to play tonight in Luxenburg (have no idea how to spell it!!!!)!!!!!!!
Cheers,
Michele
Posted by Thaurorod at 4:26 PM 1 comment:

Thank you Florence! Was fun to play in Italy and audience was awesome! The first show ever when had no idea what our vocalist was speaking to the audience since cannot really follow the Italian language.. :) After the show had a few beers too much maybe..still there's nothing like one hell of a hangover! Rock'n roll dudes and dudettes! Now at Z7 and just played a show in this awesome venue! Tomorrow back to Italy so see you In Milan!!!

It was so fuckin great tonight!!! Thank you Lyon..the best audience ever! Thank you! 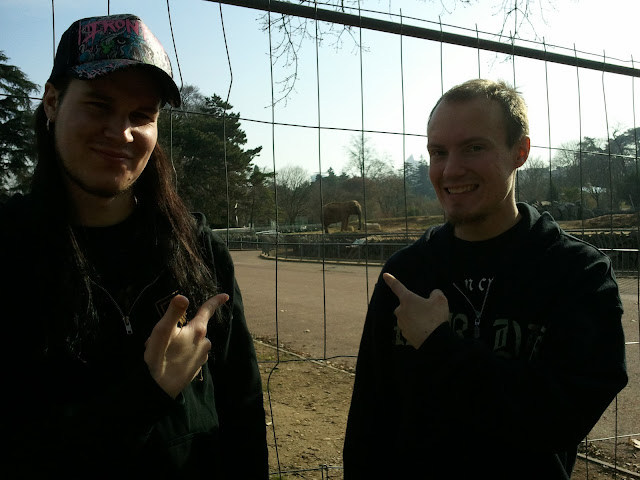 Elephant with some other animals in the zoo!

See you later and lets have some fun tonight alright!

Hanging out at the venue in Barcelona...and finally internet connection is working.. 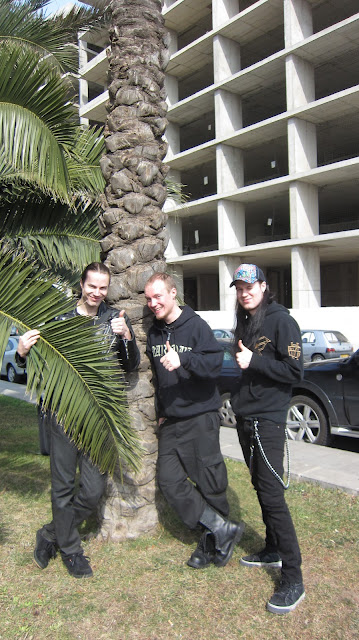 T-Rod guys with a palm tree in Barcelona. 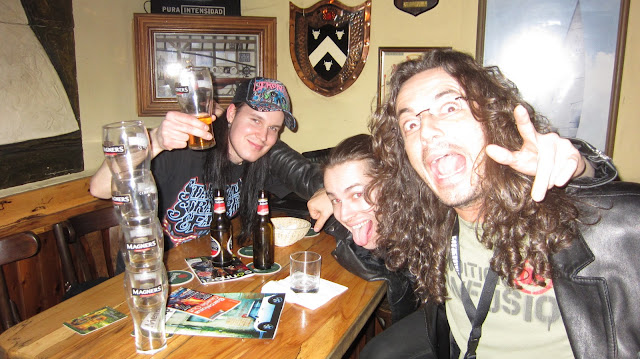 T-Rod guys in an Irish pub in Barcelona after having a few Estrella and Magners. 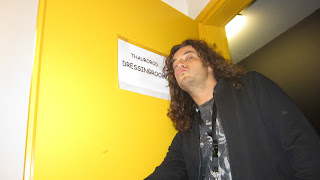 After that some problems as Nevermore bus broke in Paris..well they managed to get to the venue just in time with a van and played great fucking show at Le Phare, Toulouse! Really nice venue and the best catering of the tour so far!

Yesterday had a day-off and well maybe a bit too many drinks for some of us..hehe...
Posted by Thaurorod at 4:12 PM No comments: